A parent is still a parent even after divorce or separation 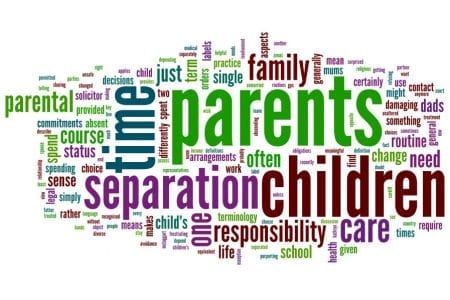 I am often surprised at how people expect their status as a parent to change, simply because their relationship status does. Being a partner and a spouse is something that can cease or change depending on the choice of one or both parties. Parenthood is, of course, for life.

Labels are unhelpful in family law

The terminology we use to describe ourselves and each other post separation can be very telling about how we view co-parenting post separation. It is no coincidence that the Family Justice system has striven to change the language we use and ‘custody’ and ‘access’ became ‘residence’ and ‘contact’ and, most recently, simply ‘child arrangements’. The emphasis is clearly on refusing to label and concentrating on sharing care or at least both parents having meaningful involvement in it.

The term ‘single parent’* is a curious one. Given that it is a fact that children generally have two parents, why does the process of separation mean that they only end up with one? By definition (and certainly parental choice) children will spend time with each parent separately post separation, so both parents will be ‘single’ parents at some time or another.

The same applies to the term ‘parent with care’*. Both parents can and do care for their children. Just not in practice at the same time. Time spent with each parent will depend on lots of factors but, like it or not, the general position is that children need routine so one parent, certainly in school time, will probably have more time for hands on care than the other. The parent who has traditionally accommodated the school routine often practically has more time to undertake care during these times and that tends to be mums. That is a societal issue and not necessarily a legal one and I would say that almost without exception dads recognise that a separation means they need to reorganise work and other commitments and be part of regular routine as well as the fun times if they want to stay in touch with all aspects of their child’s life. That can be massively helpful for mums who often need to maximise their income and find their work commitments post separation increase.

The polar opposite of the ‘parent with care’ is of course the ‘absent father’*. This is a term I find insulting as, in my experience as a family solicitor, more often than not, dads leave the family home on separation to minimise disruption for their children rather than absconding or attempting to slip out of their parenting and other obligations. Whilst dads might not see their children every day post separation, they are and wish to be very much ‘present’ in their children’s lives.

All married parents will have parental responsibility for their children and all unmarried parents will have provided dad is named on the child’s birth certificate. Parental responsibility is completely unaltered by separation and rarely affected by child arrangements orders. Parental responsibility exists whether the children are spending time with a parent or not. That means the right to be informed and consulted about all key aspects of a child’s life such as education, health, religious upbringing and medical treatment. These areas require two parent decisions and, unless an order provides otherwise, parents need to agree if children are to be removed from the country. In practice, it generally makes sense for both parents to have relationships with school and GPs to avoid unnecessary contact if it is difficult but the bigger decisions will require discussion.

Parents can, and do, parent differently once separated

Parents are permitted to exercise their parental responsibility in their own way when children are spending time with them. As frustrating as it might be, parents can and do parent differently post separation and attempts by one parent to control how time is spent, what children eat and who children spend time with in that period are given very short shrift by the Court. It of course makes sense for routines to be similar and diet and health needs met but parents can parent the way they choose provided that their choices are not unsafe or otherwise damaging (and I mean ‘damaging’ in the real sense of the word).

A parent is always a parent...

As family lawyers we are now just about getting our heads around the new terminology. There is something beautifully simple and eminently sensible about making orders that just determine where and when children should spend time with their parents, rather than purporting to confer extra or equivalent rights and responsibilities or superior parent status. Parents are, of course, already parents and they already have responsibility for their children. Nothing has changed. They just don’t live together anymore.

* For the avoidance of doubt, none of these labels are legally recognised definitions despite sometimes being treated as such by the general public and some legal representatives.

Thank you for all your help, and for being easy to talk to over a very difficult matter.